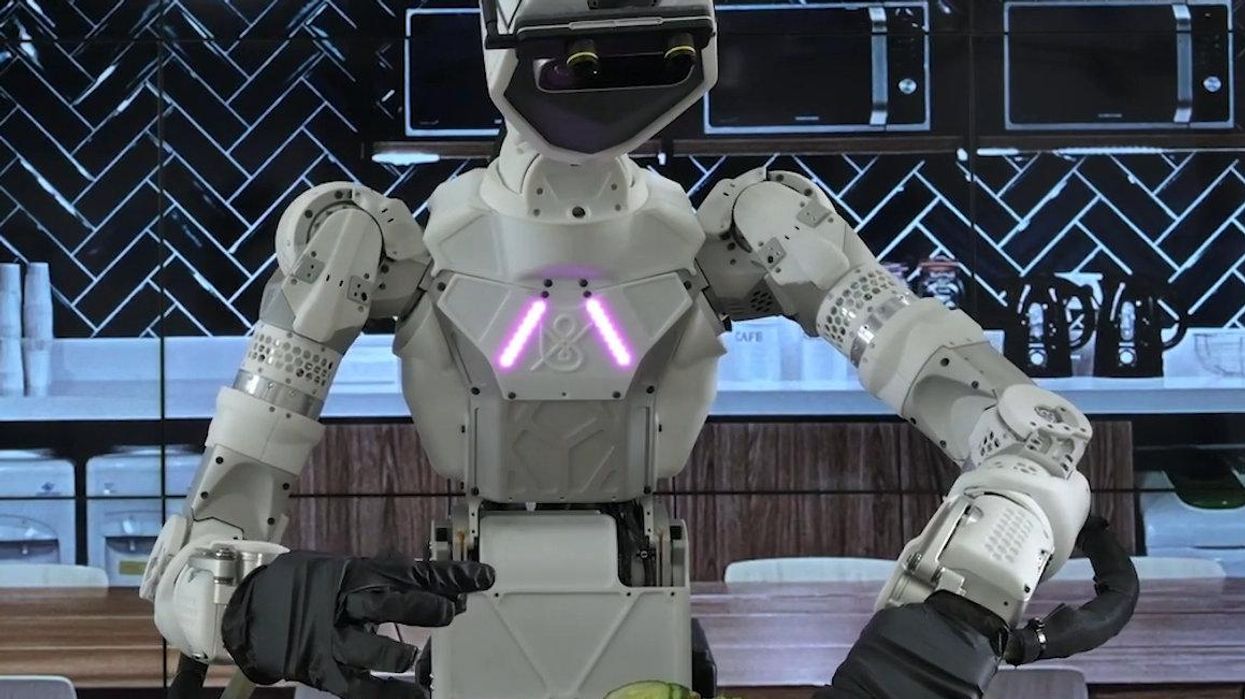 Video Friday is your weekly selection of awesome robotics videos, collected by your friends at IEEE Spectrum robotics. We also post a weekly calendar of upcoming robotics events for the next few months. Please send us your events for inclusion.

Happy Thanksgiving, for those who celebrate it. Now spend 10 minutes watching a telepresence robot assemble a turkey sandwich.

Ayato Kanada, an assistant professor at Kyushu University in Japan, wrote in to share "the world's simplest omnidirectional mobile robot."

We propose a palm-sized omnidirectional mobile robot with two torus wheels. A single torus wheel is made of an elastic elongated coil spring in which the two ends of the coil connected each other and is driven by a piezoelectric actuator (stator) that can generate 2-degrees-of-freedom (axial and angular) motions. The stator converts its thrust force and torque into longitudinal and meridian motions of the torus wheel, respectively, making the torus work as an omnidirectional wheel on a plane.

This work entitled "Virtually turning robotic manipulators into worn devices: opening new horizons for wearable assistive robotics" proposes a novel hybrid system using a virtually worn robotic arm in augmented-reality, and a real robotic manipulator servoed on such virtual representation. We basically aim at bringing an illusion of wearing a robotic system while its weight is fully deported. We believe that this approach could offers a solution to the critical challenge of wight and discomfort cause by robotic sensorimotor extensions (such as supernumerary robotics limbs (SRL), prostheses or handheld tools), and open new horizons for the development of wearable robotics.

Engineers at Georgia Tech are the first to study the mechanics of springtails, which leap in the water to avoid predators. The researchers learned how the tiny hexapods control their jump, self-right in midair, and land on their feet in the blink of an eye. The team used the findings to build penny-sized jumping robots.

The European Space Agency (ESA) and the European Space Resources Innovation Centre (ESRIC) have asked European space industries and research institutions to develop innovative technologies for the exploration of resources on the Moon in the framework of the ESA-ESRIC Space Resources Challenge. As part of the challenge, teams of engineers have developed vehicles capable of prospecting for resources in a test-bed simulating the Moon's shaded polar regions. From 5 to 9 September 2022, the final of the ESA-ESRIC Space Resource Challenge took place at the Rockhal in Esch-sur-Alzette. On this occasion, lunar rover prototypes competed on a 1,800 m² 'lunar' terrain. The winning team will have the opportunity to have their technology implemented on the Moon.

If only cobots were as easy to use as this video from Kuka makes it seem.

The Kuka website doesn't say how much this thing costs, which means it's almost certainly not something that you impulse buy.

The robotics research group Brubotics and polymer science and physical chemistry group FYSC of the university of Brussels have developed together self-healing materials that can be scratched, punctured or completely cut through and heal themselves back together, with the required heat, or even at room temperature.

Apparently, the World Cup needs more drone footage, because this is kinda neat.

Researchers at MIT's Center for Bits and Atoms have made significant progress toward creating robots that could build nearly anything, including things much larger than themselves, from vehicles to buildings to larger robots.

The researchers from North Carolina State University have recently developed a fast and efficient soft robotic swimmer that swims resembling human's butterfly-stroke style. It can achieve a high average swimming speed of 3.74 body length per second, close to five times faster than the fastest similar soft swimmers, and also a high-power efficiency with low cost of energy.

To facilitate sensing and physical interaction in remote and/or constrained environments, high-extension, lightweight robot manipulators are easier to transport and reach substantially further than traditional serial chain manipulators. We propose a novel planar 3-degree-of-freedom manipulator that achieves low weight and high extension through the use of a pair of spooling bistable tapes, commonly used in self-retracting tape measures, which are pinched together to form a reconfigurable revolute joint.

This video may encourage you to buy a drone. Or a snowmobile.

Moxie is getting an update for the holidays!

Robotics professor Henny Admoni answers the internet's burning questions about robots! How do you program a personality? Can robots pick up a single M&M? Why do we keep making humanoid robots? What is Elon Musk's goal for the Tesla Optimus robot? Will robots take over my job writing video descriptions...I mean, um, all our jobs? Henny answers all these questions and much more.

This GRASP on Robotics talk is from Julie Adams at Oregon State University, on “Towards Adaptive Human-Robot Teams: Workload Estimation.”

The ability for robots, be it a single robot, multiple robots or a robot swarm, to adapt to the humans with which they are teamed requires algorithms that allow robots to detect human performance in real time. The multi-dimensional workload algorithm incorporates physiological metrics to estimate overall workload and its components (i.e., cognitive, speech, auditory, visual and physical). The algorithm is sensitive to changes in a human’s individual workload components and overall workload across domains, human-robot teaming relationships (i.e., supervisory, peer-based), and individual differences. The algorithm has also been demonstrated to detect shifts in workload in real-time in order to adapt the robot’s interaction with the human and autonomously change task responsibilities when the human’s workload is over- or underloaded. Recently, the algorithm was used to post-hoc analyze the resulting workload for a single human deploying a heterogeneous robot swarm in an urban environment. Current efforts are focusing on predicting the human’s future workload, recognizing the human’s current tasks, and estimating workload for previously unseen tasks.

Source: https://spectrum.ieee.org/video-friday-turkey-sandwich
We use cookies to ensure that we give you the best experience on our website. If you continue to use this site we will assume that you are happy with it. Ok