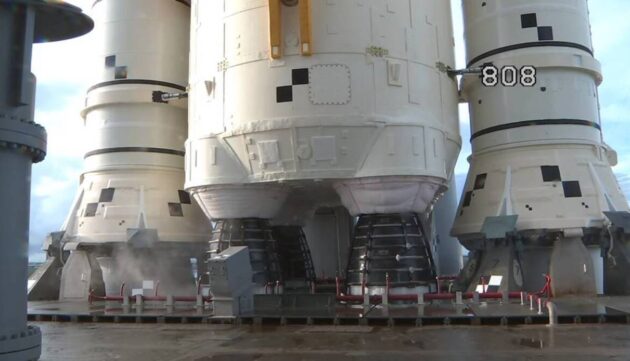 A launch-pad screenshot shows the bottom of NASA’s Space Launch System rocket, including the four RS-25 main engines on its core stage. (NASA via YouTube)

One day after the first launch of NASA’s heavy-lift Space Launch System rocket had to be scrubbed due to an engine cool-down issue, mission managers announced that they’d try again on Saturday.

In the meantime, engineers will work out the details of a go/no-go plan, just in case they face issues similar to those that forced Monday’s scrub.

Saturday’s two-hour launch opportunity opens at 2:17 p.m. ET (11:17 a.m. PT) at NASA’s Kennedy Space Center in Florida. If all systems are go, liftoff would mark the beginning of NASA’s Artemis 1 mission, an uncrewed test flight aimed at setting the stage for sending astronauts to the lunar surface in the mid-2020s.

Some aspects of the countdown will be changed for Saturday’s attempt. For example, mission managers are planning to conduct the engine cool-down procedure during an earlier stage of the fueling process. That procedure involves “bleeding” off some of the rocket’s liquid hydrogen fuel to chill the core stage’s four main engines to their desired temperature of 420 degrees below zero Fahrenheit.

When the cool-down system was tested in March during a “Green Run” at NASA’s Stennis Space Center in Mississippi, the procedure was conducted successfully, early in the fueling process. But when the hydrogen bleed occurred later in the countdown on Monday, a sensor indicated that one of the engines — engine No. 3 — wasn’t cold enough.

Mission managers decided to replicate the procedure used at Stennis.

John Honeycutt, NASA’s SLS program manager, suggested the problem might be with the sensor, rather than with the hydrogen bleed system itself.

“We understand the physics about how hydrogen performs,” he told reporters. “The way the sensor is behaving doesn’t line up with the physics of the situation.”

Honeycutt said he and his team were working out a plan to verify that the engines are properly chilled, based on a wider range of data. He said the team preferred to avoid having to go into the rocket and work on the sensor directly, which might require rolling the rocket back from the launch pad.

“What I plan to do, with the help of the team, is put us in a situation that gets us the data we need to know that we’ve got the engines chilled down appropriately and go fly, using the data that we’ve got access to today,” Honeycutt said.

Engineers will also look into other concerns that cropped up during Monday’s countdown — for example, a vent valve leak in the SLS’s intertank region. Launch director Charlie Blackwell-Thompson said that leak was apparently a consequence of the troubleshooting that was done on the hydrogen bleed system.

Forecasters say there’s a 40% chance of acceptable weather for launch on Saturday. If weather forces another postponement, Blackwell-Thompson said yet another attempt could be made on Monday, at the end of the Labor Day weekend.

For the Artemis 1 mission, the SLS rocket will send an uncrewed Orion spacecraft on a test flight that loops around the moon and heads back to Earth for a Pacific Ocean splashdown. NASA’s current plan calls for Artemis 2 to send a crewed Orion on a round-the-moon flight in 2024, and for Artemis 3 to carry astronauts to the lunar surface in the 2025-2026 time frame.

Source: https://www.geekwire.com/2022/nasa-reschedules-moon-rockets-launch-for-saturday-as-it-analyzes-data-from-first-try/
We use cookies to ensure that we give you the best experience on our website. If you continue to use this site we will assume that you are happy with it. Ok